The Complete Library of Books and Publications by Dr. Robert Cialdini Influence, New and Expanded: The Psychology
of Persuasion

In the latest edition of this highly acclaimed bestseller, Robert Cialdini—New York Times bestselling author of Pre-Suasion and the seminal expert in the fields of influence and persuasion—explains the psychology of why people say yes and how to apply these insights ethically in business and everyday settings. Using memorable stories and relatable examples, Cialdini makes this crucially important subject surprisingly easy. With Cialdini as a guide, you don’t have to be a scientist to learn how to use this science.

You’ll learn Cialdini’s Universal Principles of Influence, including new research and new uses so you can become an even more skilled persuader—and just as importantly, you’ll learn how to defend yourself against unethical influence attempts. You may think you know these principles, but without understanding their intricacies, you may be ceding their power to someone else. 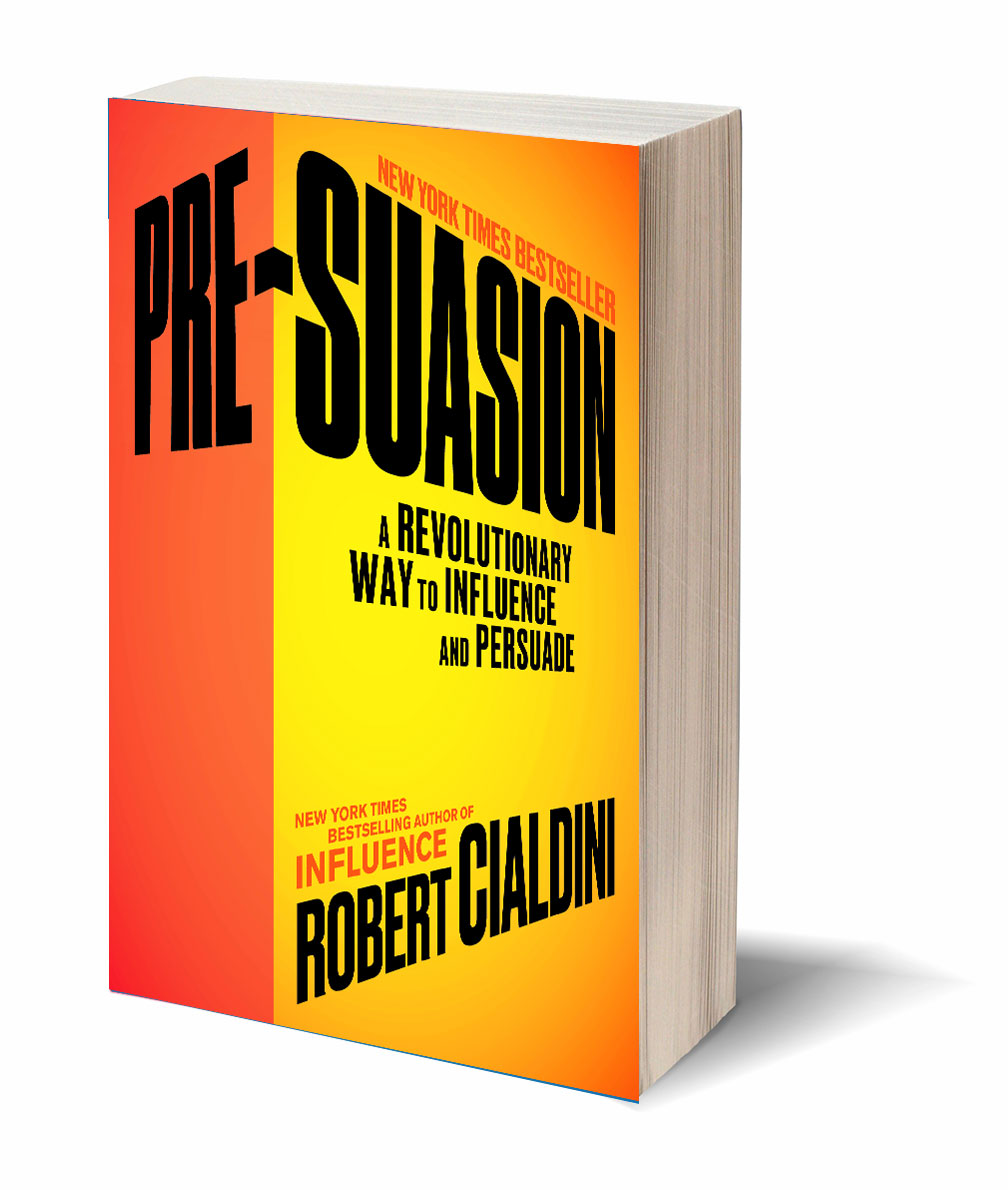 Pre-Suasion:
A Revolutionary Way to Influence and Persuade

What separates effective communicators from truly successful persuaders? Using the same combination of rigorous scientific research and accessibility that made his Influence an iconic bestseller, Robert Cialdini explains how to capitalize on the essential window of time before you deliver an important message. This “privileged moment for change” prepares people to be receptive to a message before they experience it. Optimal persuasion is achieved only through optimal pre-suasion. In other words, to change “minds” a pre-suader must also change “states of mind.”

From studies on advertising imagery to treating opiate addiction, from the annual letters of Berkshire Hathaway to the annals of history, Cialdini draws on an array of studies and narratives to outline the specific techniques you can use on online marketing campaigns and even effective wartime propaganda. He illustrates how the artful diversion of attention leads to successful pre-suasion and gets your targeted audience primed and ready to say, “yes.” Every day we face the challenge of persuading others to do what we want. But what makes people say yes to our requests? Persuasion is not only an art, it is also a science, and researchers who study it have uncovered a series of hidden rules for moving people in your direction. Based on more than sixty years of research into the psychology of persuasion, Yes! reveals fifty simple but remarkably effective strategies that will make you much more persuasive at work and in your personal life, too.

Cowritten by the world’s most quoted expert on influence, Professor Robert Cialdini, Yes! presents dozens of surprising discoveries from the science of persuasion in short, enjoyable, and insightful chapters that you can apply immediately to become a more effective persuader.

Often counterintuitive, the findings presented in Yes! will steer you away from common pitfalls while empowering you with little known but proven wisdom.

Whether you are in advertising, marketing, management, on sales, or just curious about how to be more influential in everyday life, Yes! shows how making small, scientifically proven changes to your approach can have a dramatic effect on your persuasive powers.

What you wIll Learn

Learn how small changes can make a big difference in your powers of persuasion with this New York Times bestselling introduction to fifty scientifically proven techniques for increasing your persuasive powers in business and life. In this highly acclaimed New York Times bestseller, Dr. Robert B. Cialdini—the seminal expert in the field of influence and persuasion—explains the psychology of why people say yes and how to apply these principles ethically in business and everyday situations.

You’ll learn the six universal principles of influence and how to use them to become a skilled persuader—and, just as importantly, how to defend yourself against dishonest influence attempts: Influence – Science and Practice – The Comic

Over two million readers have armed themselves with the knowledge in this book. Dark forces seek to turn society into unthinking automatons by the use of weapons of mass influence. In this graphic adaptation of his best-seller, Robert B. Cialdini becomes society’s best hope in combatting compliance professionals throughout the world. He leads a team of special forces through a battleground filled with psychological sneak attacks designed to elicit pre-programmed responses from unknowing victims. Written in a narrative style combined with scholarly research, Cialdini combines evidence from experimental work with the techniques and strategies he gathered while working as a salesperson, fundraiser, advertiser, and in other positions inside organizations that commonly use compliance tactics to get us to say “yes.” Widely used in classes, as well as sold to people operating successfully in the business world, the eagerly awaited revision of Influence reminds the reader of the power of persuasion.

Influence: Science and Practice is an examination of the psychology of compliance (i.e. uncovering which factors cause a person to say “yes” to another’s request). At some point today you will have to influence or persuade someone – your boss, a co-worker, a customer, client, spouse, your kids, or even your friends. What is the smallest change you can make to your request, proposal or situation that will lead to the biggest difference in the outcome?

In The Small B!G, three heavyweights from the world of persuasion science and practice — Steve Martin, Noah Goldstein and Robert Cialdini — describe how, in today’s information overloaded and stimulation saturated world, increasingly it is the small changes that you make that lead to the biggest differences.

In the last few years more and more research – from fields such as neuroscience, cognitive psychology, social psychology, and behavioral economics – has helped to uncover an even greater understanding of how influence, persuasion and behavior change happens. Increasingly we are learning that it is not information per se that leads people to make decisions, but the context in which that information is presented.

Drawing from extensive research in the new science of persuasion, the authors present lots of small changes (over 50 in fact) that can bring about momentous shifts in results. It turns out that anyone can significantly increase his or her ability to influence and persuade others, not by informing or educating people into change but instead by simply making small shifts in approach that link to deeply felt human motivations.